In the 33rd hot match of the Premier League, we will see Leicester City face Crystal Palace on 27 April.

In the Premier League game last Sunday, Leicester City lost to West Ham 2-3. 28 minutes into the first half, West Ham’s Jesse Lingard received the transmission from the right and broke the net, leading 1-0. One minute before the end of the half, Jarrod Bowen broke offside to receive a long pass, crossed to Lingard, and shot into the empty goal. The first half of the game was 2-0.

At the beginning of the second half, West Ham made another move. Tomas Soucek passed to Jarrod Bowen in the penalty area to score, leading to 3:0. In 70 minutes, Leicester City was recovered 1 point by Kelechi Iheanacho. After that Marc Albrighton passed into the penalty area to Iheanacho, chasing into 2-3. Although Leicester City rushed to catch up in the second half, they still lost to West Ham.

In the Premier League game last Saturday, Crystal Palace played Chelsea at home, losing 4-1. In the early part of the first half, Kai Havertz first scored by a long shooting in the penalty area. After 10 minutes, Christian Pulisic close-range shot and led 2-0. In 30 minutes, Kurt Zouma was flying header goal in the penalty area. The halftime result was Chelsea leading 3-0. 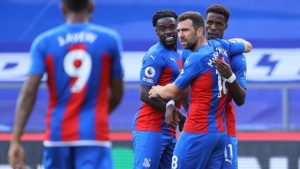 In the 63 minutes, Crystal Palace’s substitute Jeffrey Schlupp made a pass from the left, then Christian Benteke headed in. Finally, In 78 minutes, Christian Pulisic received a cross from Reece James and scored, Chelsea beat Crystal Palace 4-1.

Leicester City is currently ranked 3rd with 56 points, only 1 point ahead of West Ham which is ranked 4th. In the next game against Crystal Palace, Leicester City need to win to ensure that third place is not squeezed out.