In the 8th hot match of the Premier League, the two strong teams will play against each other. Manchester City will face Liverpool at home court next Monday!

Manchester City played against Sheffield in the 7th round of the Premier League game. Kyle Walker scored a goal and won the match 1-0.

Manchester City has one less game in the Premier League and is currently ranked 10th. But in the last 7 games unbeaten (5-2-0), 2 games even scored 4 goals and not lost a goal. Although the team’s performance has some ups and downs. However, the main striker Sergio Aguero still failed to come back from injury, which greatly reduced Manchester City’s scoring ability.

However, Manchester City performed well in the Champions League group stage yesterday. At home against Olympiacos F.C., they won 3-0 and remained unbeaten in three games. The group held the top spot.

Liverpool beat West Ham 2-1 in the last game, and the points rose to 16 points, continuing to rank first.

In this game, Liverpool once again scored 2 goals after falling behind 0-1 at home, and finally reversed the opponent 2-1. The new member Diogo Jota, who came on the bench, scored 1 goal for Liverpool again, helping the team win two consecutive league games Get 6 points. 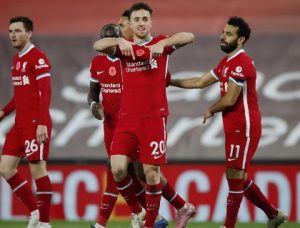 Moreover, Jota performed a hat-trick in the Champions League match between Liverpool and Atlanta yesterday and finally helped the team win 5-0. After joining Liverpool, Jota has represented the Red Army and has scored 6 goals in all competitions, and they are all very critical points, turning the team’s disadvantages around.