In the 6th hot match of Premier League, Fulham will play against Crystal Palace at home court this Saturday.

In the Premier match last Sunday, Fulham challenged Sheffield United away and finally scored the first point of the season with a 1:1 result. Forward Ademola Lookman started this game, this is his first chance to start in Fulham career. In 77 minutes, Lookman helped Fulham start the record.

Fulham is one of the three promoted teams this season, but their performance is not as good as their ideals. It was not until the 5th round that they scored the first point in the league and ranked at the bottom.

The football club’s director Tony Khan and team leader Scott Parker know what the problem is. However, the four midfielder players that the team wanted to acquire were either hit by COVID-19 or they were taken first by other clubs.

Parker also admitted that the team’s defense is poor. If Fulham is unable to sign the new backbone before the transfer window closes, he can only continue to rely on the 32-year-old Tim Ream and Michael Hector, who does not have much Premier League experience. The future is really worrying.

Crystal Palace also played against Brighton at home court last Sunday. But The performance of the Crystal Palace is average in this match. Brighton has a ball possession ratio of 66%, and the number of shots is even more than 20 times, 19 times more than Crystal Palace. 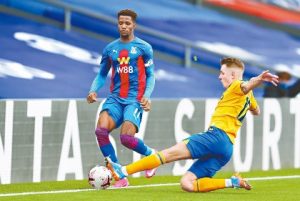 Last 15 minutes of the first half, Crystal Palace got a free throw opportunity in the frontcourt. Wilfried Zaha calmly scored to help the team lead 1-0 at the half. But the advantage could not be maintained until the end of the game, and Brighton equalized in 90 minutes and finally made a 1:1 tie.

Although the strength of the two teams is almost the same, Crystal Palace seems to be even better. Don’t miss this hot match this Saturday! Check out more about the W88 sports news, odds, latest promotions, and more!